Bold Leadership in a Day of Embarrassed Believers

Boldness—holding to your convictions—comes easily when you’re in the presence of your friends; it is more difficult in the presence of those who disagree with you and seek to destroy your reputation. Boldness behind a pulpit is one thing; boldness in a city council meeting is another. Boldness is most clearly seen when you’ve burned your bridges and put your convictions on the line.

Our best examples are the disciples. “Now when they saw the boldness of Peter and John, and perceived that they were uneducated, common men, they were astonished…” (Acts 4:13). These apostles had come to the conclusion that Jesus was the Messiah, the Son of God, so for them, nothing else mattered much. Their reputations, imprisonment, and even beatings were a small price to pay for loyalty to their Master, their Lord. Boldness was birthed in their hearts because they discovered news that others needed to hear and know, whether they wanted to hear it or not.

Their boldness attracted the attention of those around them. They spoke with a sense of authority, a confidence that God was standing beside them, and they would experience His favor even if they didn’t have the favor of others. “Whether it is right in the sight of God to listen to you rather than to God, you must judge, for we cannot but speak of what we have seen and heard” (v. 19–20). Their loyalty to God transcended their loyalty to their constituency.

As a pastor, I must add two cautions.

Boldness should never be disguised anger. I attended a conference where a speaker preached against homosexuality with a judgmental tone of condemnation. No doubt when he was finished, he felt self-righteously good about what he’d done. He had boldly spoken the truth. But truth without compassion is not biblical boldness; it is judgmentalism. Pharisees can be callously bold and proud about it.

Also, boldness is not sharing our own ideas, plans, and hunches as if we’re speaking on behalf of God. I think of the many pastors I’ve known who spoke boldly about what they believed God was telling them about everything from building plans to staff changes, all of which led to needless church splits and controversy. Humility—not boldness—about our own ideas always serves us well.

Whenever the word boldness is used in the New Testament, it’s in relation to ministry; it has to do with sharing the Gospel. Paul asked the congregation at Ephesus to pray for him, “that words may be given to me in opening my mouth boldly to proclaim the mystery of the gospel” (Ephesians 6:19). Of course for Paul, as for us, that includes boldness about a whole range of doctrines such as biblical sexuality (Romans 1) or exposing false teaching and the like (2 Corinthians 11).

At a time when many believers are embarrassed to say that they are Christians lest they be tagged as “right wing” or “hateful,” Christian leaders must demonstrate what boldness looks like in the wake of our increasingly hostile culture. We must take a firm public stand on these biblical issues without apology and without rancor. Bold leadership means counting the cost and believing that faithfulness to what God has revealed is worth the risk.

One of my heroes is the sixteenth century court preacher, Hugh Latimer. When asked to preach in front of King Henry VIII, he struggled with exactly what to say. You’ll recall that Henry had the reputation of chopping off the heads of his enemies, including two of his wives.

Latimer struggled, “Latimer! Latimer! Do you remember that you are speaking before the high and mighty King Henry VIII who has the power to command you to be sent to prison and how he can have your head cut off, if it please him? Will you not take care to say nothing that will offend royal ears?”

Then he paused and continued, “Latimer! Latimer! Do you not remember that you are speaking before the King of kings and Lord of lords; before Him, at whose throne Henry VIII will stand, and before whom you also will give an account? Latimer! Latimer! Be faithful to your Master and declare all of God’s Word.”

Latimer did declare God’s Word, and although Henry spared his life, Henry’s daughter, Queen Mary (Bloody Mary) had him burned at the stake in Oxford. As he was dying amid the flames, he called out to Bishop Ridley who was also consigned to the flames with him, “Play the man, Master Ridley; we shall this day light such a candle, by God's grace, in England, as I trust shall never be put out.”

The secret of boldness? Fear God more than the flames. Fear God more than your reputation. Let us be done with fainthearted, tepid leadership. Ours is the day to “play the man” with bold, uncompromising truth and love, risking it all for God.

If Paul requested prayer for boldness, can we do any less?

Erwin W. Lutzer is Pastor Emeritus of The Moody Church where he served as the Senior Pastor for 36 years. He earned a B.Th. from Winnipeg Bible College, a Th.M. from Dallas Theological Seminary, a M.A. in Philosophy from Loyola University, and an honorary LL.D. from the Simon Greenleaf School of Law. He is also the featured speaker on three radio programs that are heard on more than 1,000 outlets in the United States and around the world: Running to Win, Moody Church Hour, and Songs in the Night. Dr. Lutzer is also an award-winning author of numerous books including: Rescuing the Gospel, He Will Be the Preacher, The Cross in the Shadow of the Crescent, One Minute After You Die, When a Nation Forgets God, and Christian Bookseller’s Gold Medallion Award winner, Hitler’s Cross. Join Dr. Lutzer and the rest of this year's speaker line-up at the seventh annual Shepherds 360 conference in October. 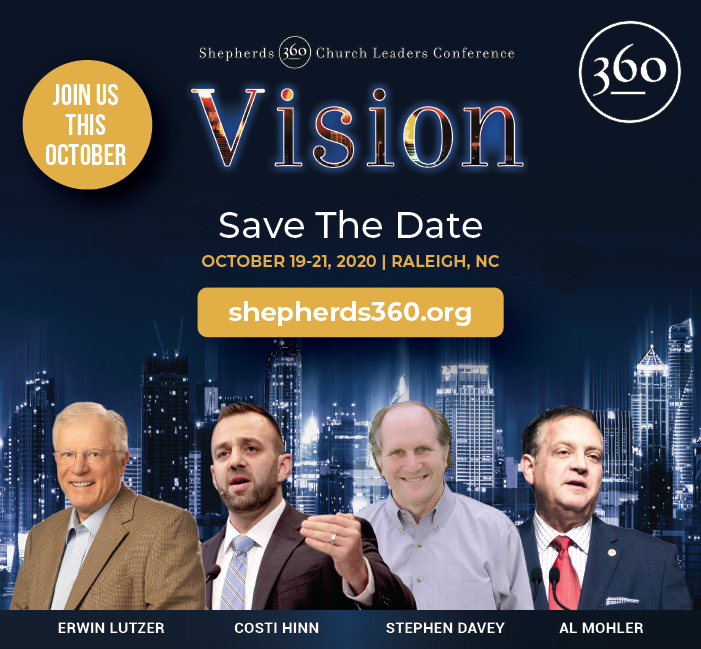