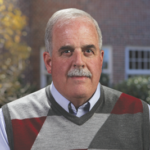 After graduating from Pillsbury Baptist Bible College and Central Seminary, Dr. Bookman served as pastor/teacher in Rock Falls, Wisconsin. He joined the faculty of Pillsbury College in 1973, taught there for eleven years, and eventually served as Chairman of the Bible Department.

Following his time as professor of Bible at Pillsbury, Dr. Bookman continued to teach at various Bible colleges as well as to teach and pastor at local churches. During these years Dr. Bookman began to see the need for a renewed emphasis on the life of Christ and the nation of Israel.

In 1987, Dr. Bookman joined the Bible Department faculty of The Master’s College. While there, he conceived, designed, and implemented the IBEX program, a semester-abroad program in Israel. During those years, he began to see the need for a renewed emphasis on the life of Christ, and the nation of Israel. In 1998, Dr. Bookman joined the Friends of Israel as a national representative. Throughout the years he has taught at various colleges and seminaries, and has served as pastor and interim pastor at local churches. Much of his ministry in the last decade has focused on both Israel and the life of Christ, leading study trips to Israel, and speaking at Bible Conferences across the United States and abroad.

Dr. Bookman joined the STS faculty in August, 2009. He heads up the student recruitment and teaches in the area of New Testament Exposition. Dr. Bookman also enjoys leading numerous study trips to Israel which includes an annual trip specifically designed for our STS students.

Dr. Bookman and his wife, Diane, have three children and seven grandchildren.