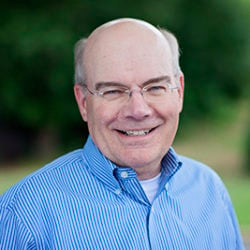 Dr. Burggraff was saved at the age of 21. A graduate of the University of Minnesota, he received his Bachelor’s degree in Chemical Engineering in 1975. In 1980, he was a part of the first graduating class of Calvary Baptist Theological Seminary, earning a Master of Divinity degree.

Dr. Burggraff assumed the responsibilities of the presidency of Calvary Baptist Theological Seminary from 2001 until January, 2006. In 2006, he joined the administration of Clearwater Christian College where he served as Vice President for Spiritual Formation and Ministry Development, and Professor of Theology.

Dr. Burggraff has an extensive speaking ministry at conferences and retreats both nationally and internationally. He and his wife, Lucy, also frequently minister at couples’ retreats.

In the summer of 2009, Dr. Burggraff became the first Chaplain of Shepherds Theological Seminary. He teaches at STS in the areas of Systematic Theology and Expository Preaching, and he serves as the Doctor of Ministry Program Director.