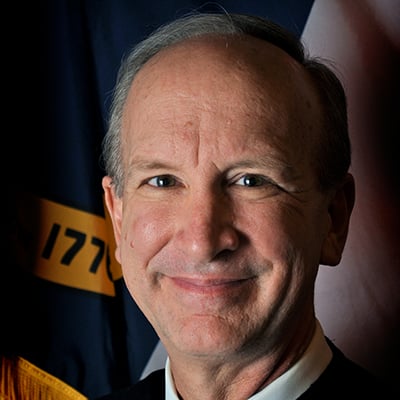 He began practicing law in Asheville with the Van Winkle Law Firm and later served as vice president and general counsel of Cannon Mills Realty and Development Corporation in Kannapolis. In 1985, Chief Justice Newby was appointed as an assistant United States attorney for the Eastern District of North Carolina in Raleigh where he served for over 19 years. During this time, he played an integral role in conducting the undercover sting operation that recovered North Carolina’s original copy of the Bill of Rights, stolen in the aftermath of the Civil War.

Chief Justice Newby is an Eagle Scout and is the recipient of the Heroism Award. In 2012, he was designated a Distinguished Eagle Scout, a national honor that recognizes both his service to the Boy Scouts and his dedication to public service.

Chief Justice Newby has been married to Macon Tucker Newby since 1983, and they have four children. He and his wife attend Christ Baptist Church in Raleigh.